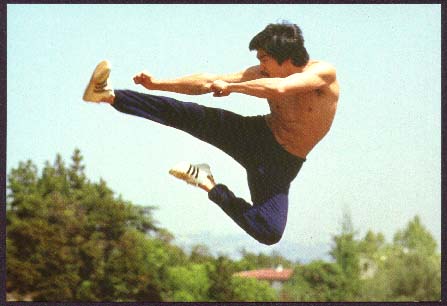 FACT: Bruce Lee injured his back causing damage to his sacral nerve in 1970. The injury was due to overtraining and lifting too heavy during "Good Mornings", a weight training exercise, not during a fight as many people believe. Although doctors told him he would not be able to continue his lifestyle in the martial arts, through determination he fully recovered and went on to star in four and a half films made between 1971 and 1973.

FACT: Did you know that Bruce Lee used the focus glove for martial arts training as far back as 1962? In fact, it was Bruce Lee who popularized its use in the martial arts. Focus gloves are now used by almost every martial artist in the United States.

FACT: Bruce Lee was far from being genetically perfect, as most people believe. Bruce Lee wore contact lenses and actually failed his physical exam in 1963 and was deemed physically unacceptable by the U.S. Army Draft Board.

FACT: Bruce Lee was introduced to the football shield for kicking by student Dan Inosanto. At first, he rejected the idea, but within a few days he had developed a series of drills and the kicking shield became a mainstay of Jun Fan Gun Fu Jeet Kune Do training. Today there is a shield in almost every martial arts school in the USA.

FACT: Bruce Lee was one of the first Chinese Gung Fu teachers in the United States to teach non-chinese. Si-gung Lee did not allow racial discrimination to enter into his choice of who he wanted to teach. He chose to see people as individuals, and regardless of what the chinese community at that time wanted he stood his ground, even though he was challenged to fight as an ultimatum to stop teaching people other than those of chinese decent.

FACT:Although Bruce Lee started his acting career at age 6 and was known worldwide as an actor, he considered himself a martial artist first and an actor second.

FACT: Bruce was so fast, he once broke five boards with a speed break on Hong Kong TV, as they were held stacked dangling between his assistant's thumb and forefinger